You would like to purchase a Biofidelic crash test dummy?

You would like to purchase a Biofidelic crash test dummy?

Around 300 participants from 11 countries were guest at the crash test facility this week. Whilst 30 exhibitors from the field of anti-terrorism barriers used the presentation space in the crash test hall, the participants were guest in the new CTS event hall. In a modern industrial setting here, lectures on current issues from the area of counter-terrorism were presented. Besides, there was no shortage on practical crash tests. During the two seminar days, the CTS-team led by test manager Ralf Bührmann conducted three crash tests, two of which were performed under standard conditions.

Five spectacular crash tests were performed exclusively for this year’s experts seminar. Around 100 participants from the field of accident reconstruction were along with the highly informative lectures certainly the highlight of the expert seminar, which has been held for the seventh time now. Besides classic rear-end collisions, all participants were able to impress themselves with the characteristics of the biofidelic crash test dummies which are produced in-house in the CTS dummy lab. These were also extensively tested in a motorcycle crash and in a pedestrian crash test. Among others present were William (Rusty) Haight (Collision Safety Institute) and Michael DiTallo (Northwestern University) from the USA, who amusingly and informatively accompanied the seminar. We would like to thank all the speakers sincerely and we look forward already to the Expert Seminar 2019.

Münsters economy development, the Wirtschaftsförderung Münster, were guest and hosted their series-event “Business Breakfast” at the crash facility. Around 130 management staff from the Münsterland region were able to enjoy breakfast in the crash hall after introductory words by Mr. Dr. Robbers (Management of Business Development Münster) and then follow the remarks of Dipl.-Ing. P. Schimmelpfennig, who presented all facets of the crash test centre and in particular the biofidelic dummy. Afterwards, was a spectacular crash test for all guests to see, before heading back to work around 10 a.m.

New crash tests in our database

CTS is happy to present more than 50 new crash tests in the database. With immediate effect, new crash tests from Axa / Winterthur, AZT and AGU are available for download. Many of the crash tests were carried out with brand-new vehicles using the latest state-of-the-art measurement technology and prepared specially for the CTS-database, including many new EES-tests and rear-end collisions.

At this year's PraxisConference Pedestrian Protection at the BASt in Bergisch Gladbach, the CTS-team were present with the Biofidelic dummies. Managing Partner Peter Schimmelpfennig presented all innovations and further developments of the dummies produced in Münster. A highlight at this year's event was the crash tests conducted under the direction of test manager Ralf Bührmann. Bührmann and his team crashed three times. Thus, all visitors were able to witness live how the Biofidelic dummy behaves during a collision. The results will be published soon in the VKU.

This week Mr. Dipl.-Ing. M. Eng. Marco Görtz and around 20 students from the RWTH Aachen visited us. To begin with was a short presentation on the areas of CTS, before heading on, together with the dummy laboratory manager Dr. rer. nat. Gerrit Reglitz, for a guided tour of the new Biofidelic Dummy production facility. The detailed tour of the company was rounded off with a tour of the extended crash test site and ended, as usual, with a live crash test (lorry vs car).

This week, the company Henkel was present as guest and used the crash site for a product launch. Over 100 participants from seven countries attended the product presentation and were able to see a live crash test. Furthermore, in small groups, the dummy manufactory could be visited.

Automotive Testing Expo Europe 2018 is one of the leading exhibitions in the automotive industry. Over 400 exhibitors are currently represented at the exhibition centre in Stuttgart. Also present – of course – is CTS. Visit us at our stand ? 1432 in hall 10. There our experts are presenting the new Biofidelic Dummies. We have brought several fully functional dummies as well as dummy-skeletons from our dummy laboratory. Dipl.-Ing. P. Schimmelpfennig and technician K. Schulte are looking forward to your visit. 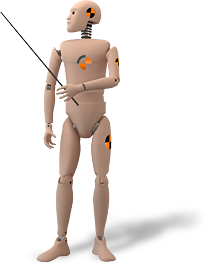